"Sunnnday," I say it luxuriously in my head.

Growing up, Sundays were sacred. Not because of church, really, but because of family. It was a day where everything was special, where the "treat yo self" manta reigned supreme and you never had to leave the couch unless you really wanted to.

When I was in college, I went through a bad breakup and started the tradition of driving to my Mom's house on Sundays. My first stop was always the fridge, not necessarily to eat anything, but just to admire the bounty of leftovers and takeout from the week: future snack possibilities. Mom would put out a spread, we would *buy* a movie on demand and spend the day being deliciously lazy.

In my adult New York City life, my Sunday ritual has taken several forms. There was a time when I would do two workouts, totaling 2.5 hours, then head home to shower and nap and eat takeout. There was a season, single and living in Williamsburg, where Sunday (and many other days) were spent nursing apocalyptic hangovers with Gatorade and Netflix.

Eventually, I settled into a great relationship, a cozy apartment in Ditmas Park, and a new How I Sunday right now.

The first rule of Sunday: there is no alarm. This means I may wake at 8am or it 11am - there is no judgments here. Sometimes Nick (my boyfriend) and I wake up together, but on those days that the early-ish wakeup hits me, I really enjoy sneaking out of bed to make coffee and then sneaking back into bed to drink it. We are currently without bedside tables (space issue, tried some floating Ikea shelf things - they fell off the wall basically immediately), so coffee in bed is a semi-dangerous game. I take my chances. 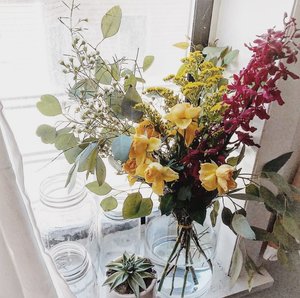 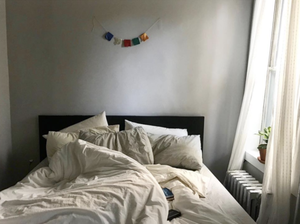 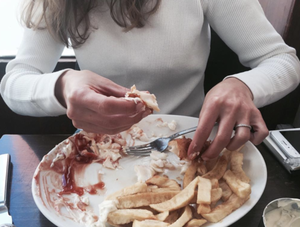 There is something you should know about me...I hate brunch. I don't understand why anyone would leave their perfectly comfy home to eat $20 overcooked eggs at a place where you have to wear real clothes.

So breakfast, if we still have groceries at the end of the week, is a home thing. Hopefully there are eggs. Maybe bacon, maybe a breakfast taco, maybe cereal. If there are no groceries to be had, I have been known to make Nick throw on a shirt so we can go down to the Catskill Bagel Co (I like an egg everything bagel, light cream cheese + lox) and maybe the Cortelyou Farmer's Market. But that's ambitious.

Once fed, There is a leisure period that hopefully consists of some kind of show or movie or book I'm engrossed in. I relish in the luxury of not making much effort to engage with the outside world on Sunday mornings. This is especially important, because in the afternoon, I teach yoga at Lyons Den Power Yoga in Tribeca.

Sometimes I do yoga before my class. I like my friend Emily’s 2pm. She plays a deliciously weird mix of 80’s and hip hop. I get to let my freak flag fly. It feels very irreverent and somehow perfect to me. Very indulgent. Very Sunday.

Then, I teach. This is an “always” thing. Sunday at 4pm. I took the class as a temporary sub thing three years ago and I haven’t stopped teaching it since. Often the class is packed, but sometimes it’s tiny. Always, it’s lovely and moody and we move and sweat and clear some space for the week to come. It’s one of my favorite classes of the week, and often full of regulars who are, as they say, “picking up what I’m putting down.”

Sometimes after class I go out for beers and fried food but more often than not these days, I go home and cook dinner. Something yummy but not too involved - quick spaghetti pomodoro (with a huge handful of arugula on top; fight me) or sheet tray nachos. We drink wine - good wine, natural wine, usually red, usually French. We watch an old movie or a juicy show and we cuddle and I look around my apartment and marvel at the life I’ve created.

If you notice, throughout the passage, there are a lot of "sometimes". How I Sunday is all about indulging in what feels right, which changes from week to week. One thing that remains the same is that Sunday is about family (given and chosen) and food.

Katie Richey is a native Texan turned New Yorker and a lover of laughing and french fries. She is both a yoga teacher and a wine professional, a juxtaposition that suits her perfectly. Follow her journey @katieleighrichey

Back to How I Sunday