have been unfairly deemed a villain. She shows such contempt towards me, a loyal companion of many years. The most recent incident occurred on Sunday afternoon. She analyzed and dissected me like a science class specimen.  I felt utterly disrespected, and this letter may be the only vehicle with which I may explain myself.

The facts: I started my work at 9AM  (there’s no rest for the wicked, right, dear reader?).  The grueling 8 hours that followed were a slow build that lead to a rather severe eruption around 5PM (EST).

But I'm getting ahead of myself.

I like structure. I like routine. My agendas are as clear, concise, and cogent as possible. Those are the hallmarks of a strong leader. When I enter a space, I am in charge, and that’s the way it has always been -- but on this day, she decided to challenge me, ignore my intentions. Her obstinance was an unexpected SNAFU on the relatively simple morning I had planned.  A work disruption like this is not, let us say, pleasing to me.

It all started with a call. The incessant ringing. The volume increasing as it neared. I don’t take calls.
But she made me answer it.

The content and the caller are unimportant, but what followed was forcible participation in her work-- related emails and texts that irritated me to no end, each <<ding!>> a  reminder of her insolence. I kept trying to bring her back to the day I had planned. It exhausted me. I think she could sense my weakness and was, I admit, able to convince me to lie down. This “mandatory relaxation time,” disconnected me physically from my work even further. She massaged me. I tried to resist.
I wondered whether this pursuit of intimacy was inappropriate, whether we were crossing any lines, but it was at this moment she was gentle with my growing outrage, maternal even, and I didn't know how to thank her. So I didn't.

Then, she fed me. She thought it would make me feel better. It did. I didn't like that she was right. And I hated that she was suddenly being kind to me. So I decided to kill her.

I jest. I wouldn't do that. But I DO enjoy making her angry. It’s easy to upset her, really. You just have to increase the right kind of pressure.  And once she gets going, it’s like a carousel, or better, a freak show in which she is made the reluctant star. She cries, she breathes, she talks to me. She yells, she rests, she thinks she’s crazy. So she cries, she breathes...and so on. And as master of ceremonies, I can make the ride go faster or slower any time I want. 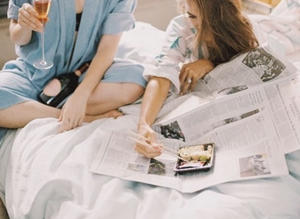 As happens with most pleasure-gleaning games, I eventually tired of her emotional dance, so I wanted to fuck with her, to try and beat her at her own game. I did decide to kill her...but with kindness. The same she showed me. I wanted to see what would happen if I let her imagine I cared, imagine she’d won. And for a moment, she seemed happy. It was...different.
During this period of lupine repose, I, in sheep's clothing, helped her tackle the afternoon’s tasks, motivated by the kind of mild irritation that actually encourages productivity over the mundane. "The sooner I can do this, the sooner it'll be over". That kind of thing.

But she wasn’t grateful. She just kept adding things to the list! The more productive we were, the more she wanted to do; it was like she was glad I wasn’t being myself! Sick of the toil, I politely suggested that we take a stroll outside in search of caffeine and fresh air, you know, to soothe us both. My treat.

She obliged; it’s moments like these that make me wonder if I'm in love with her. She’s smart and talented and warm and soft. She goes to great lengths to take care of herself, stay healthy, strong, and rested. I like that. But I don’t like when she becomes too self-absorbed to surrender to me. And that's what happened when we returned.
She immediately got us back to work, and this time she invited others into the mix. I hate the others. They distract her from me. If she knew me at all, she’d have known this was NOT the day for these antics. This day was always supposed to be about us.

Simply put, reader, I lost it. Hey, it was better than losing her. I'm not proud of what happened next, but I.... went off the rails. I was pointed, persistent, and ferocious.

She attempted to fight back with a kind of infuriating pacifism, pleading that we just go to bed-- as if sleeping together would solve everything. Pffft. And then in a flash, she completely broke down. It was the worst I've ever seen her. The others left. I had won the battle, and I felt like a king.

We’ve known each other for about eight years. She’s my everything. I’m most powerful with her and nothing without her. But when she feels good, she has no time for me. How do you think that makes me feel?

That’s why I behave like I do. I have to neg and beg her to keep us afloat. If she could only see that we’re critical parts of each other’s identity, I think she’d accept me, and we could live a life that’s consistent, safe, and only mildly unpleasant (for me at least). Isn’t that better than risking the unknown? Sure, maybe others could be better for her, but what if they were worse?

When she passed out, I left; she needs time to recover. But I'll be back. She usually gets a little bloated and insecure during her cycle, and I think she’ll let me in.

Until then, dear reader,

Hannah Kloepfer is a PAW: Producer, Actor, Writer based in NYC. This multi-hyphenate is currently working as a writer’s assistant, developing content and culture for DonorUP, and lending her voice to various animated characters and commercials. Her migraine hasn’t reared its ugly head in some time; she hopes it’s found peace...wherever it went; life’s a whole lot better without it. Follow Hannah @hannahkloepfer and visit the magic that is www.sedimentcreative.com and www.donorup.org

Back to How I Sunday